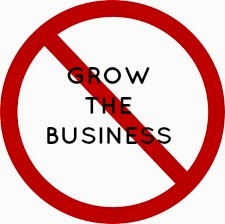 I’m somewhat of a purist and as such, I don’t appreciate the use of “grow” when its direct object is other than something in the natural world – flowers, fur, or corn, for example.  “Grow the business” sounds like nails on a chalkboard to me.

Luckily, I’m not alone in my dislike.


According to The New York Times Manual of Style and Usage, “The newer usage of grow to mean expand (grow the business; grow revenue) is business jargon, best resisted.”

Patricia T. O’Conner, author of Woe is I: The Grammarphobe's Guide to Better English in Plain English, concurs: “Speaking for myself, I hope this remains corporate jargon and doesn’t become more widely used. Even worse, though, is the phrase ‘grow down,’ as in ‘I promise to grow down the deficit.’ Anyone capable of speaking in such a way should grow up.”

A woman after my own heart, Diane had this to say at English Language and Usage Stack Exchange, a question and answer site for linguists, etymologists, and serious English language enthusiasts: “As a young editor (long ago), I was taught to use "grow" only in reference to plants, and that companies "build" a business. Somewhere in the past 30 years, businesses started to use the word "grow" to refer to their company. It really does grate on my ears. I know it's common usage now, but I still consider it marketing jargon and I always change it when editing.”

And finally this from Peck’s English Pointers: “The Oxford Guide to Canadian English Usage (2nd ed., 2007) says: ‘Despite the misgivings of some commentators, the new transitive sense is very well established in financial journalism.’ Bryan Garner, in Garner’s Modern American Usage (3rd ed., 2009) puts the new use at Stage 3 in his five-stage Language-Change Index, meaning it’s widespread though still worth avoiding in careful writing…. It’s clear from the opinions of Garner and others that the new use hasn’t fully crossed the border into ‘standard’ territory yet. The style guide of the U.K.’s Guardian newspaper fairly shudders at the prospect, stating that ‘horrors such as 'grow the business' should only be used when quoting someone.’"

And you can quote me on that!

Inspired by Ima on (and off) the Bima, this post is one in a series marking the days of the Jewish month of Nisan leading up to Passover, which begins at sundown on Friday, April 3, corresponding to 15 Nisan. If you want to play along, check out this year's #BlogExodus and #ExodusGram prompts.  This series of posts also is priming my heart, mind, and spirit to participate in a six-day summer writing seminar, Beyond Walls:  Spiritual Writing at Kenyon.
Posted by JanetheWriter at 10:56 PM